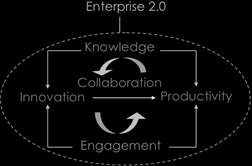 For today’s knowledge-intensive enterprise, collaboration and engagement are key to productivity and innovation

The Changing Role of the CIO

I’ve attended a couple of events in recent weeks for and about Chief Information Officers, namely the CIO Summit at Enterprise Technology World hosted by iQuest, and the launch of the Harvey Nash CIO Survey 2013. Both were very interesting events with great speakers and a wealth of information, and a recurring theme of many of the talks was that today’s CIO is increasingly looked to as an innovator within their organization while simultaneously being asked to “do more with less”.

Professor Martin Curley, VP & Director of Intel Labs Europe, spoke about how the CIO’s job is now not just about technology – the CIO’s job is to make money, and in that regard the role is becoming more “Chief Innovation Officer”. Prof. Curley quoted Moore’s Law (naturally!) as being one of the key reasons for this; because technology is changing so rapidly, every industry is being disrupted so the CIO must innovate to change with it.

Both Microsoft and Singtel recently said that CIOs may be an endangered species and need to speak the language of business to survive. Indeed as an example, at the Harvey Nash event Henry Minogue from UPC spoke about how “application development roadmap” should become “product development roadmap” when speaking with business folks.

Do CIOs Want To Innovate?

From Harvey Nash’s survey, we learn that there’s an “innovation gap” – 71% of CIOs see great innovation potential in their organisations but only 2% consider innovation to be fully achieved. CIOs report wanting their leaders to have a strong vision for the future but not to be “blue sky thinkers”, perhaps indicating an aversion to an uncertain future. It was mused that “blue sky thinking” and a strong vision for the future by leaders go hand in hand but I think a “strong vision” is a firm one, i.e. one that changes infrequently and traditionally-conservative CIOs may see blue-sky thinking as threatening to a steady ship. Indeed, this is why many CIOs are not natural innovators; a conservative outlook does not an innovator make.

In the next year, areas of investment focus and increased spending include “bring your own device” (BYOD) and the use of cloud services, both areas of natural discomfort for the traditional CIO as they relinquish some control. BYOD investment has to happen to deal with the unstoppable trend of employees using their own devices, while cloud investment is now a common strategy for “doing more with less”. Collaboration and mobility also score highly, unsurprising in a connected world where geographically-distributed work forces increasingly need efficiency in their means of communication, and remote working is the norm.

From Information to Innovation

As mentioned above, the CIO is increasingly seen as the Chief Innovation Officer (and the CTO is becoming the “Chief Transformation Officer” so watch out CTOs, you’re not safe either!) but I find myself wondering whether Microsoft, Singtel and other commentators are right? Changing the title or changing the duties of the CIO are essentially the same thing; reactive to a dynamic, changing environment. CIOs are being forced to change with it and as always in times of change and disruption such as today, there are opportunities for some while others are threatened – it’s the natural order of things.

Today’s CIO needs to adapt to have an innovation mindset if they are to survive, because for tomorrow’s CIO, innovation IS the job.