In this, the second part of our roundup of the best of this year’s Dublin Web Summit, we have picked another selection of thought leaders, deal-makers, industry-creators and super-geeks whose talks we found particularly interesting. Like the Rolling Stone top 500 Albums ever, we’re sure we missed some and our choice will no doubt differ from yours, so please paste the links to the video you thought was best in the comments! 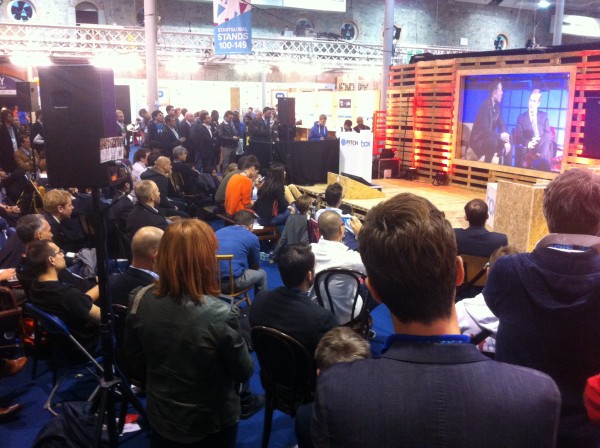 The main stage was packed to the rafters, so a large crowd gathered around the Pitch Stage to watch Enda Kenny trying to get Elon Musk to locate Tesla manufacturing in Ireland.

While chit-chatting with attendees during the summit, one answer was unanimous when talk switched to the subject of speakers. “Elon Musk” was the name on everyone’s mind from the moment he was announced as a late addition to the line up. All kinds of monikers apply to Musk, “real life Iron Man” being the most used. The main stage hall was utterly rammed and satellite screens were set up for the overflowing audience to watch what seemed on paper to be a bit of a mismatch with Enda Kenny joining Musk and Shervin Pishevar on a panel moderated by Mark Little.

He’s a man of few words, and who could blame him when his actions have impacted the world so significantly, but this video is worth a watch if only to witness the Taoiseach touting Cork as an ideal location for Tesla factories. Little manages to bring Musk out of his shell and to recount his teenage years and his journey from enthusiastic geek to world-changing super-brain.

The intro music is “Little Old Wine Drinker, Me” but no, Gary isn’t an alcoholic (that we know of), he’s a social media brand consultant with an entrepreneurial background, having made tens of thousands of dollars selling lemonade and baseball cards before he was in his teens. He also runs a wine-selling eCommerce store, hence the boozey theme tune.

“Social media gurus” can be anything from abhorrent snake-oil salesfolk to genuinely insightful, visionary trendspotters and setters, and Gary is firmly at the visionary end of the spectrum. Listen, learn and afterwards I bet you’ll find yourself at http://www.twitter.com/search

“How to have nice things” is the title of this talk, a playful introduction to a profound treatise about the nature of online community participation and creation. He also describes “Spolsky’s Law”, which describes the inalienable right that people feel they have to write anything they like when they see a text box on the Web. Joel created StackOverflow, for many years and to this day the go-to community for programmers to help with their woes, so he knows what he’s talking about.

Great nuggets of wisdom on how to prevent online communities falling apart and becoming terrible places, and he delivers it in a flowing, story-like way that keeps you listening the whole way through. He almost tricks you into learning – I hate when people do that!

It’s hard to make a truly different-feeling place on the Web, even harder to align this with your key brand values, especially if you’re a luxury fashion retailer. But this is what Gilt has managed to do. Based on the concept of “flash sales”, Gilt sells limited-inventory apparel and accessories (and recently, cars!) in a slick, usable environment that makes you feel like you’re in a boutique shop.

Gilt’s battle-hardened VP Architecture, Eric Bowman, talks of the company’s culture of “continuous innovation” where alignment, execution, trust and embracing failure means Gilt have maintained a position as market-leading eCommerce site while managing to experiment ferociously on their recommendation channels and handling 100x increase in requests when their daily recommendation email goes out.

Any talk that’s titled “Programmers makes great CEOs” is fine by me! Nick’s company DataSift has just taken on $42M in funding to further their vision of taming the tsunami of data from Twitter to aggregate, filter and extract insights that can be used by brands, businesses, new outlets and financial services industries. See? It’s possible to talk about big data analytics without saying big dat…damn.

Nick’s great to listen to whether you’re a techie or not, he’s been at the forefront of Twitter analytics and the social network as a platform for business growth since the beginning.

Tech evangelist, blogger and author Robert Scoble recently said the best way to stay ahead of tech trends is to watch what the money men are doing. Well if you’re going to watch anyone, it should be Index Ventures’ Saul Klein.

This is a great talk that you need to watch if you want to understand where the next Big Thing is coming from and the “economics of risk”.

When the Head of Search for the second largest search engine on the planet says that Web search has left the building, you should listen. Stefan talks about how the concept of searching the Web has changed with the advent of smartphones, context-awareness and cat videos. Ok, that last one we added but the rest is all there!

The model of search is changing, bits and atoms are connecting.

Humour is central to everything that Baratunde does. He’s a comedian-turned-marketeer and that profile oozes through in his presentation style which blends the witty with the informative as Baratunde explains “Why Marketing Doesn’t Have To Suck”.